Greetings, A particularly high-tempo and dynamic element of this year’s International Mine Countermeasures Exercise (IMCMEX) operations includes the mass casualty drills (MASCAL) that were performed on ships underway such as USS Sterett (DDG 104), HMS Penzance (M106), and RFA Cardigan Bay (L3009). Similar to other active simulations during these maneuvers, MASCAL drills are designed to provide life-like and realistic recreations of shipboard accidents and traumatic injuries associated with a mass casualty incident (MCI). Augmenting shipboard capabilities to effectively address mass casualties is an important facet within maritime security operations (MSO), and this year’s MASCAL exercises Nov. 5 and 6 have provided incredibly realistic reproductions of mass casualty incidents to enhance training.

GULF OF OMAN (Nov. 5, 2014) Actor Mark Morris and Royal Navy Sailors assigned to the ships HMS Penzance and RFA Cardigan Bay, prepare props for a mass casualty drill during the International Mine Countermeasures Exercise (IMCMEX). With a quarter of the world’s navies participating including 6,500 Sailors from every region, IMCMEX is the largest international naval exercise promoting maritime security and the free-flow of trade through mine countermeasure operations, maritime security operations, and maritime infrastructure protection in the U.S. 5th Fleet area of responsibility and throughout the world. (U.S. Navy photo by Mass Communication Specialist 1st Class Ace Rheaume/Released)

“Normally, you don’t get these large-scale medical training opportunities often enough. It has been a helpful and unique experience to see how many different military and civilian personnel respond to an incident of this nature,” said Hospital Corpsman 2nd Class Mark Roby, a reservist who served as a planner and liaison for the U.S. Navy during the exercise. “To learn and observe how a mass casualty incident is addressed from beginning to end has been a great asset.”
While these types of drills are not new for this area of responsibility, MASCAL drills for IMCMEX represent an important element of training for all participants interested in improving their readiness and capabilities within maritime security. Unique to this year’s exercise is the use of actors from a group called Amputees in Action to serve as real-life patients for the maneuvers, vice the use of mannequins as has been used in past exercises. This brought an incredibly realistic and lifelike component to the exercise, which was one of the goals planners had going into the maneuvers.
“These MASCAL exercises during IMCMEX have been so valuable, partially because it demonstrated our collective readiness to treat major medical events as a Naval force, but also because it reinforced that everything we learned in our training prepared us for what unfolded during the exercise,” said Lt. Stephanie Tijerina, the lead medical planner and observer during this year’s MASCAL exercises. “The operational concepts involved with planning and executing a mass casualty treatment procedure were really enhanced with the realistic nature of all the activities.”
This year’s MASCAL maneuvers involved evolutions at sea within the NAVCENT area of responsibility, including off the coast of Oman. A typical evolution involved a simulated accident that was managed in three phases, or “roles”. Role 1 involved a major accident resulting in severe injuries or casualties aboard a ship with limited medical capabilities. Once the incident severity is assessed, a determination is made whether patients in the exercise need access to more intensive medical care, such as surgical capabilities that exist aboard larger ships such as RFA Cardigan Bay (L3009) (Role 2). If the incident is larger or more severe than these capabilities are equipped to handle, then planners are tasked with determining how to airlift patients to shore-based medical facilities (Role 3). All three phases were simulated and executed as part of the MASCAL maneuvers during this year’s IMCMEX.
“The lessons learned from these exercises can be applied to any maritime incident, for both military personnel and civilian mariners alike,” said Roby. “Whether it’s an accident from a shipboard malfunction to an explosion from a mine, these MASCAL maneuvers helped the crews prepare for the worst.”
The exercises also included more international participation, with United Kingdom partners intimately involved throughout the process. Planners hope for even more partner nations to become involved in future exercises.
“The concept of ‘See One, Do One, Teach One’ really applies to these exercises. I was really impressed with our work with our U.K. partners and the opportunities for mentorship of junior medical personnel that these maneuvers provided,” said Tijerina, a reservist with extensive patient care experience.
“I really hope more nations take part in these exercises in the future, because this experience has been so valuable.”
With a quarter of the world’s navies participating including 6,500 Sailors from every region, IMCMEX is the largest international naval exercise promoting maritime security and the free-flow of trade through mine countermeasure operations, maritime security operations, and maritime infrastructure protection in the U.S. 5th Fleet area of responsibility and throughout the world. 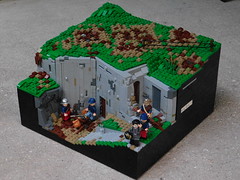